Technology is playing a much bigger role in customers’ lives, and is changing the way senior management view the IT department. Historically the CIO’s role was to keep the lights running; now, however, IT is considered to be not only the key to unlocking new revenue, but also a way of keeping up with the competition. This shift is almost causing management to expect IT to build the perfect solution, which will solve every problem rather than address the ones which offer the most value.

Organisations that mount technology projects hope to achieve some significant results never before achieved. Management look to successful technology companies as the benchmark, but only focus on the end product or services rather than the minimal viable steps they took to get there. Very quickly, assumptions are made and the sheer size these projects grow to results in severe delays. This causes significant brand impacts, and in some cases results in the loss of customers and overall market share.

The biggest barrier to delivering solutions is the organisation itself: specifically, the tangle of structure and silos, hierarchy, vested interests, internal politics and established ways of working.  Attempting to design and deliver the complete solution usually fails due to competing priorities and constrained boundaries. The vast task of bringing the moving parts together to focus and work together to deliver the same thing at the same time results in delays and compromises. 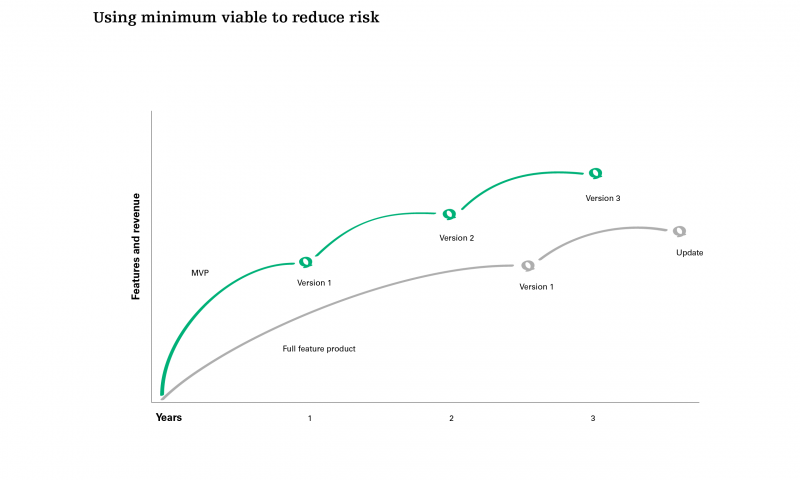 Building anything new is a risky business. There are no guarantees that once the solution is developed, that anyone will actually want to use it.  Larger solutions increase this risk due to the in-frequency of releases. By reducing the time to build and release, organisations create an opportunity to build customer relationships and create frequent value. This helps to reduce the cost of failure and eventually reduces risk due to the reduction in quantity and complexity of each delivery.

Organisations are still trapped in a production mind-set and focus only on the solution they are building rather than who the solution is for.  Teams assume customers only want to use the complete solution and have no other motivations. Significant effort is put into producing as much as possible, regardless of whether people want it. Organisations that are able to focus on the minimum viable set of features can still scale, but they only scale what they need rather than what they think they need.

Projects which have an IT focus start off with a clearly defined scope, but can very quickly lose focus due to unplanned requirements being added. This turns a small achievable project into a large unmanageable solution, which tries to solve every business problem.  Instead of narrowing the scope to something which is achievable, IT starts to drift away from its original purpose, losing focus on the real problem, resulting in delays or worse the wrong things being delivered. 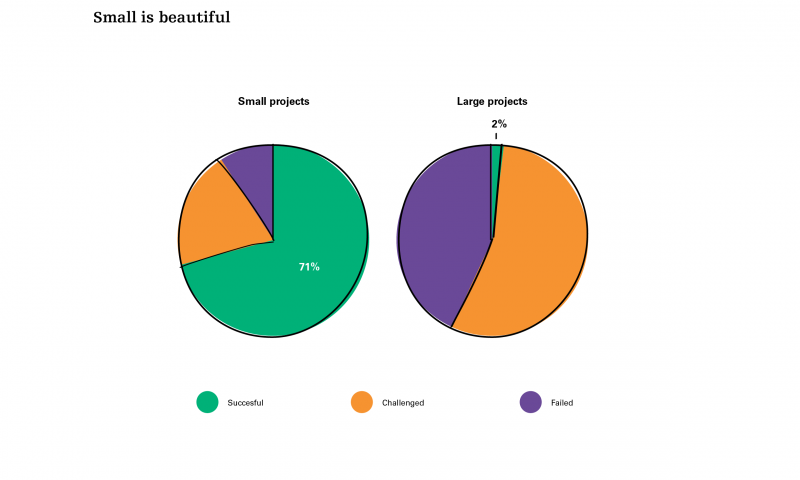 On average 2% of large IT projects, with a significant budget are successfully delivered, in comparison to the 71% success rate of smaller projects. Focusing on the minimum viable enables IT deliveries to be broken up into smaller pieces. Thinking small keeps leaders from chasing every problem with a technology solution. They start to recognise that even technology has limits, and to get the best from it requires customer feedback as early as possible. This creates a steady stream of value through smaller more frequent releases rather than bundling them into big solutions.

Focus on the minimal viable to make the biggest impact

Changing the mind-set from building large scale to the more obvious can have much greater impacts. Leveraging the same resources to focus on building a set of minimum viable features helps organisations connect with customers much earlier. This helps validate assumptions and removes the risks and costs associated with larger solutions. Each minimum delivery provides customers a platform to tell the organisation what really works. This enables the organisation to get to the true essence of the solution, stripping away the non-essential parts, to deliver consistent meaningful outcomes.

Not just first but relevant

In today’s market it is not just about being first, it is about being relevant. With so much new technology, it’s crucial that companies understand what really works. Focusing on the minimal viable option brings the fight back to the competition, but also gives your users a platform to tell you what they think should be improved. This early feedback saves you money, and delivers real business and customer value, because you only build the technology the customer truly needs.